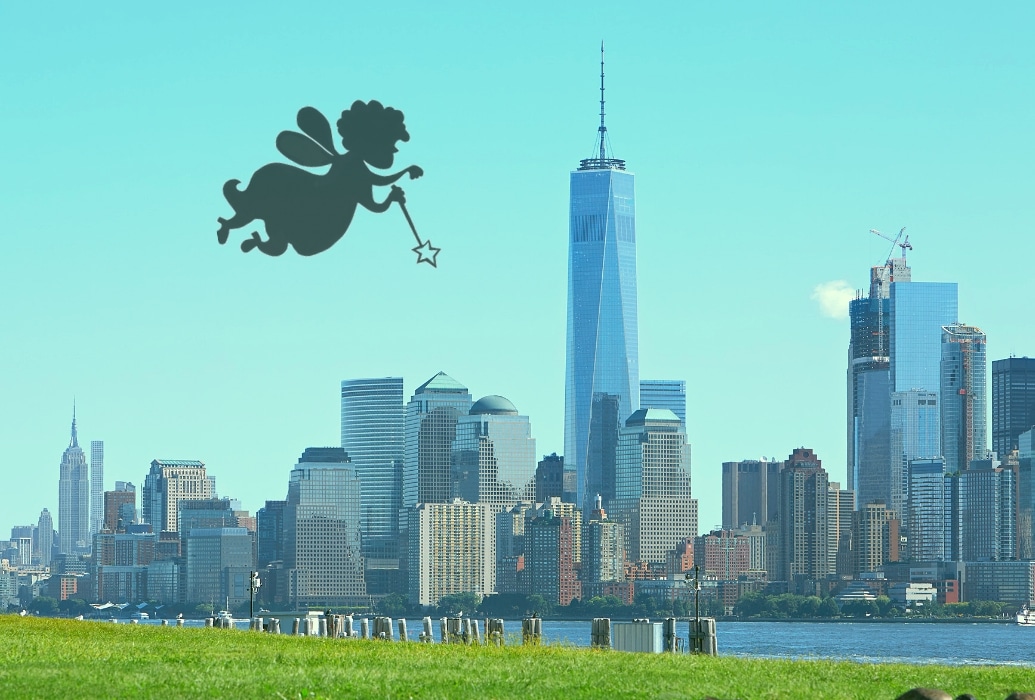 The world can finally see the real beauty and value of energy efficiency now that one of the world’s largest cities cast its spell and announced its Green New Deal. Energy efficiency has long been the Cinderella in Earth’s climate change story – overlooked because of its humble nature, and not as alluring as fields of solar panels or circulating wind turbines. I get it. There’s not much to look at with energy efficiency, which focuses on energy that wasn’t used. But it’s the impact of those savings and how you achieve them that reveal the beauty of energy efficiency and a sustainable vision of New York City (NYC) counts on it.

Passed by the City Council on Thursday, April 18, 2019 and announced by Mayor Bill de Blasio on Earth Day 2019, NYC passed its own version on the Green New Deal, called the New York City Climate Mobilization Act, a package of 10 bills and resolutions. The NYC Green New Deal is part of the city’s OneNYC 2050 vision and a $14 billion effort. In this Act, NYC recognized the impact of existing commercial buildings on greenhouse gas (GHG) emissions and became the first major city on the planet to mandate a solution with energy efficiency leading the way. Finally, energy efficiency gets to go to the ball with all the other climate change suitors. OneNYC extends beyond simply addressing climate change issues also addressing equality and a stronger democracy for a vision encompassing environmental sustainability, economic equality, and social justice.

What is Energy Efficiency?

Simply stated, energy efficiency is avoided energy use. First, it’s given life through analysis that compares current energy use to expected energy use after implementing an energy saving project. Engineers calculate energy and cost impacts based on tried and true engineering analysis (the heart of our business) which evolves over time as buildings and technology change. Those savings can then be verified through comparing pre-install vs. post-install energy use. In the end, your only proof of energy efficiency, besides gazing up shiny new HVAC equipment, lighting, building controls, etc., is less energy use resulting in a smaller bill. But that’s some rewarding proof to have wouldn’t you say? 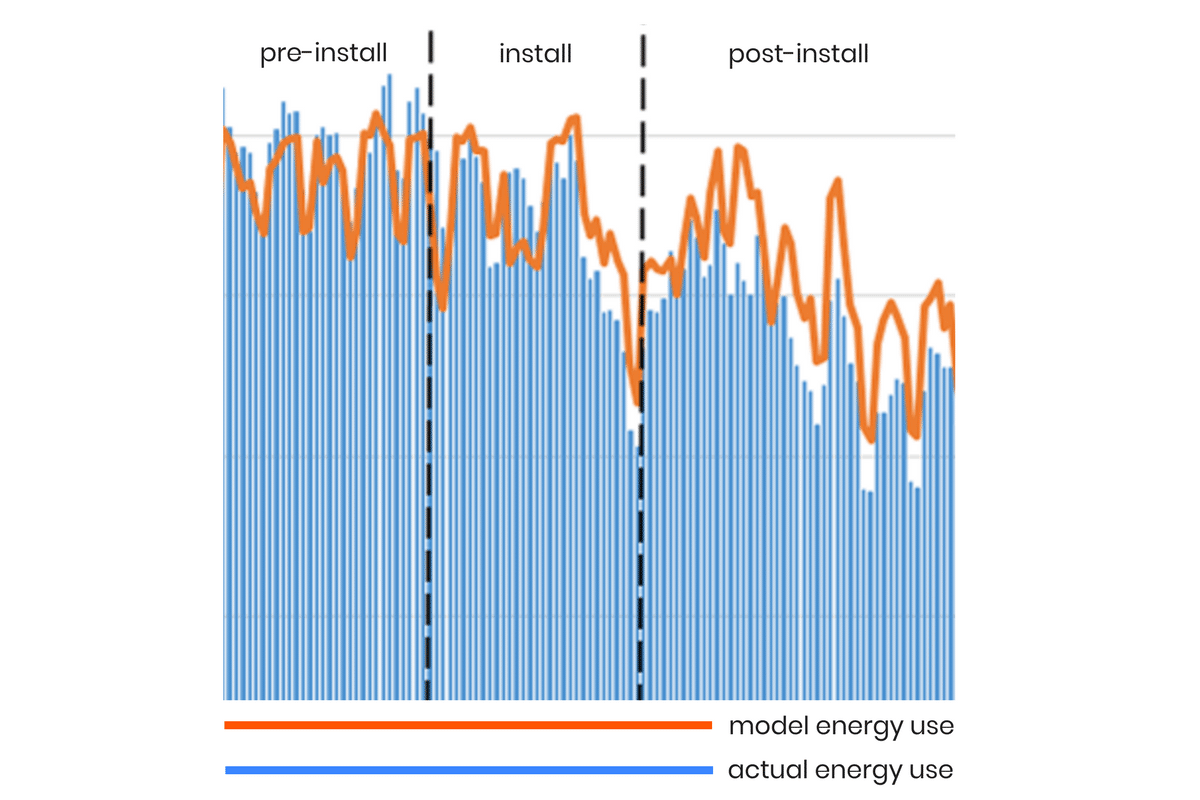 Sure, saving energy saves money. But what’s kept energy efficiency locked in the cellar all these years is that saving energy and money tomorrow costs dollars now. Most building owners don’t feel compelled to make the world a better place (we are super grateful to work with ones who do). Replacing big energy-using systems (heating, cooling, lighting, etc.) or envelope components (windows, insulation, etc.) in buildings costs big money. Despite saving money on bills, financial paybacks can often be long because of high project costs and analyses don’t typically provide any credit for environmental impact. So, if it ain’t broke, why fix it?

This is exactly what NYC experienced, a lack of initiative to implement energy-saving retrofits. Despite leading by example, with NYC investing $3 billion into retrofitting city government buildings, the City Council realized landlords simply aren’t going to follow suit without financial repercussions. It’s just like people who need a health scare to reform their lifestyle and make healthier choices. Unless building owners are forced to make changes to building operations, they generally won’t.

We witnessed this phenomenon first hand with Local Law 87. It requires buildings over 50,000 sq. ft. to periodically undergo energy audits retro-commissioning. Our experience was building owners who contacted us were looking for the cheapest way to meet these requirements. To satisfy the demand for low-cost audits and retro-commissioning, less-than-qualified firms entered this field. They offered low-cost services to meet City requirements but, delivered little value. This resulted in no significant changes to building energy use. That’s not to say there aren’t many qualified firms and building owners who took action.

What Does Energy Use Have to Do with GHG Emissions?

There’s a direct link between energy use and GHG emissions. GHG are gases that trap heat in the atmosphere. Carbon dioxide (CO2) is a common one and some others include methane, nitrous oxide and fluorinated gases. In the U.S. most GHG emissions come from burning fossil fuels such as coal, petroleum, natural gas and hydrocarbon gas liquids.

Since fossil fuels contain mostly carbon and hydrogen, and when burned, oxygen combines with carbon-forming CO2 and water to release energy. We use this energy for producing electricity in power plants burning natural gas or coal and generating heat in buildings that use fuel oil.

Why Focus on Energy Efficient Buildings?

Realize that big buildings require big amounts of energy to heat, cool, and operate. The NYC Mayor’s Office of Sustainability (MOS) reports that two-thirds of GHG emissions come from buildings. The less energy buildings use, the greater the reduction in GHG emissions; since less power translates to less power plants. Less power plants, means less GHG emissions from the burning of fossil fuels, not to mention nuclear plants which have their unique environmental concerns. 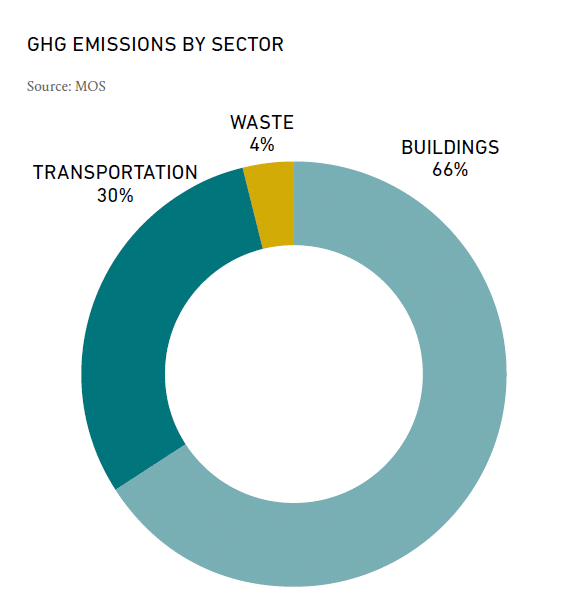 Less energy use also means spending less money and using resources for generating or transmitting clean power. In 2017, the New York Times reported less than a quarter of NYC electric energy came from renewable energy sources. This doesn’t include fuel oil used for heating. OneNYC plans for NYC to be 100% carbon neutral by 2050 and source 100% clean energy by 2040. Last year, the city used 27% clean energy. So, there is a long way to go, but energy efficiency can help by reducing the size of infrastructure necessary to procure enough clean energy. 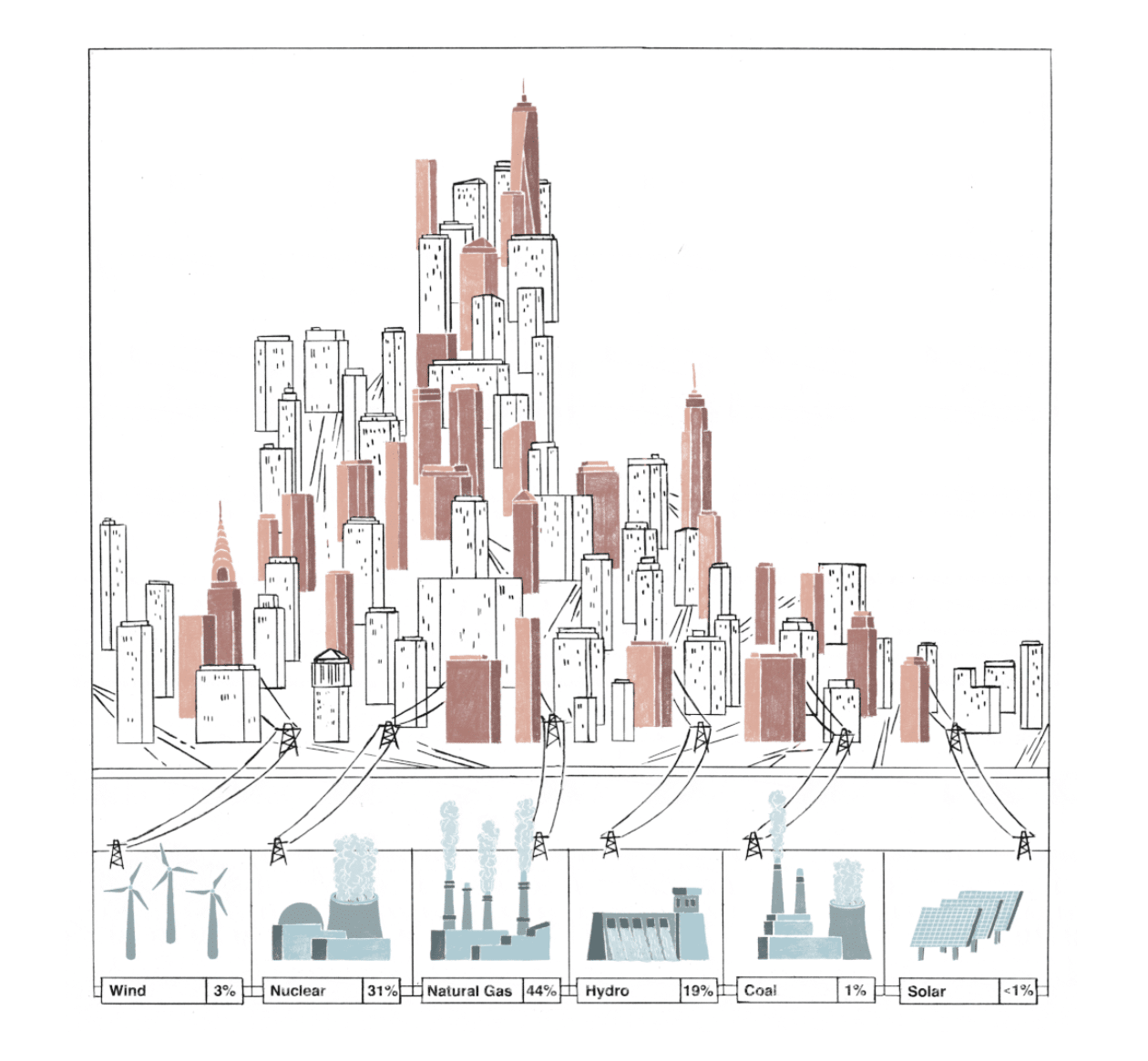 What Does the New York City Green New Deal Say About Energy Efficiency?

One of the 10 bills in the New York City Climate Mobilization Act (aka the City’s Green New Deal), is bill Int. 1253. This bill establishes an Office of Building Energy Performance and greenhouse gas emissions limits for existing ‘covered buildings’. It describes the calculation for buildings emissions intensity, annual reporting requirements, and penalties for non-compliance. This bill also expands existing retro-commissioning requirements to certain buildings over 25,000 square feet.

As of 2017 City government operations emissions were already down nearly 30%. Their goals in this bill have a slightly different timeline which include:

All listed emission targets are relative to emissions in the base year of 2005.

Though not in this bill, but described in the OneNYC plan, NYC plans to eliminate the carbon footprint of new buildings. It mentions working towards requiring net-zero new building construction by 2030. This includes banning all-glass facades in new construction, unless they meet strict performance requirements.

To reduce GHG emissions, buildings will be deemed compliant or non-compliant based on whether their ‘building emissions intensity’ is less than the legislated limit and fined when non-compliant. These limits are set for five-year durations beginning in 2024. The bill specifies limits through 2034 and leaves future limits to 2050 to be determined no later than January 1, 2023.

Currently, GHG emissions coefficients are set through 2034 with future values to be set by January 1, 2023.

Building owners will need to file an annual energy compliant building report which reports their buildings emissions and either compliance or non-compliance with emissions limits. They need to be certified by a registered design professional. Report extensions may be granted but they will not modify the owner’s requirement to comply.

Excepted buildings, listed previously, will not be subject to building emissions limits. Instead they will be required to implement prescriptive energy conservation measures.

There are penalties for non-compliance. The Mayor announced that the biggest buildings could receive fines over $1 million per year but smaller emissions violations would be much less, in the thousands. Penalties for violations will be calculated, and no more than, the difference between documented building emissions and the limit multiplied by $268. Penalties for non-filing of reports will be calculated, and no more than, the gross floor area multiplied by $0.50 for each month. There is a 60-day grace period, if you file a late report demonstrating compliance.

Required compliance reporting requirement begins on May 1, 2025 and every May after. Note that buildings over 50,000 square feet are already required to report their annual energy use under Local Law 84. So, this bill encompasses more buildings (estimated to include about 50,000 buildings total) and establishes an enforceable system to reduce the population of large energy use offenders.

Setting the Stage for a Happy Ending

Forcing big buildings, the City’s largest energy users and therefore emissions contributors, to reduce energy use and use clean energy, will yield the greatest and fastest impact on reducing GHG emissions. This is exactly why NYC’s Green New Deal uses regulations rooted in energy efficiency as a heroic main character in the story of climate change. Despite facing opposition from the real estate industry, our energy-efficient Cinderella gets to attend the ball because one of the planet’s largest cities waved its magic legislative wand placing energy efficiency in the climate change spotlight, revealing its beauty and value that penny-pinching types have long ignored. Though with local laws still needing to pass and energy retrofits to occur, it’s a promising sneak preview at what we hope is a happy ending. If you need help meeting these limits, contact us anytime.