It’s Not All Sparkle. It’s Spectrum and Cosine Correction: Your Guide to Buying a Light Meter 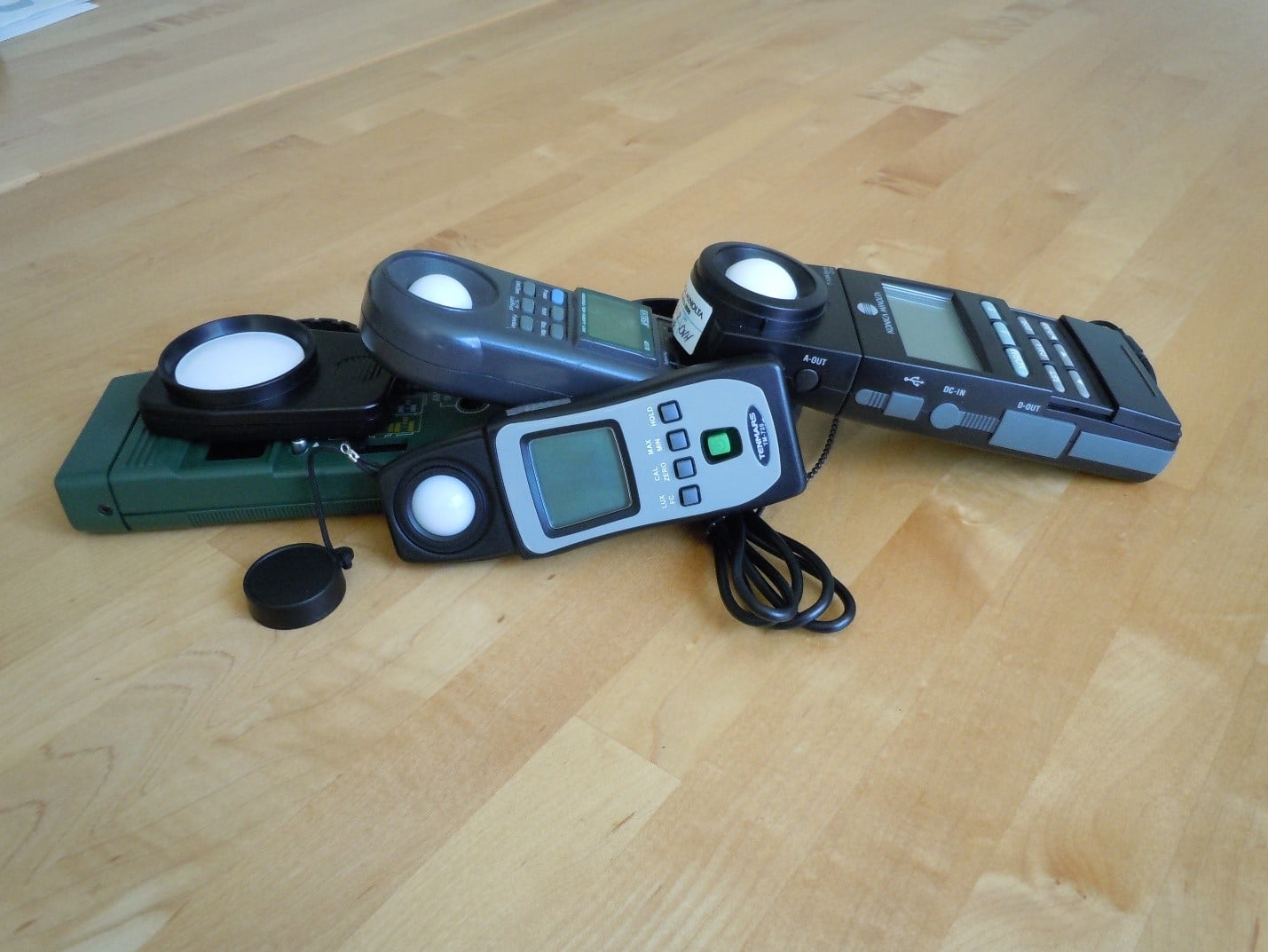 08 Jun It’s Not All Sparkle. It’s Spectrum and Cosine Correction: Your Guide to Buying a Light Meter

In a previous post, I wrote about smartphone apps and their inadequacy with respect to illuminance measurements (that is, their ability to measure footcandles or lux). That post took a deep dive into why smartphones are not up to snuff as a professional light meter. As I wrote that post I started wondering about how my own light meter compared to these apps. Down the rabbit-hole I went.

As an energy auditor (and a BEAP at that), I carry around a backpack full of tools. That means a few different thermocouples, an amp clamp, an infrared thermometer, a temperature/humidity meter, an illuminance meter, a differential pressure meter, a laser distance meter, some screw drivers, some Allen wrenches, a mirror, a camera, telescoping wand, and of course – the ubiquitous clip board. When one of our engineers found the Sper Scientific, an all-in-one device that measures illuminance, temperature, humidity, and air speed, I went out and got one for my tool kit. Hey – when you can combine four tools in one – why not?

Accuracy of these all-in-one devices is not great. Why does that matter? What makes a light meter accurate? How is accuracy judged? How do you make use of an inaccurate light meter?

Why is an accurate light meter important?

As everyone knows from firsthand experience, light is useful for getting work done. Some tasks need lots of light – like when filling out the Sunday crossword with a #2 pencil on newsprint. Other tasks, need relatively little light – like finding the popcorn tub at the movie theater while watching your choice summer block buster.

As an energy engineer, I balance providing the right amount of light with saving energy in the building. One of the key metrics is illuminance – or light incident on an imaginary or physical surface in a space. The IES 10th Edition Lighting Handbook dedicates 100’s of pages to tables of illuminance values indexed to space and task types and it is the go-to resource for lighting professionals.

As part of my energy efficiency efforts, I evaluate what industry best practices are for provided illuminance against what I physically measure in the space. When it’s too high, I might recommend dimming the existing controls, installing lower output luminaires, or potentially redesigning the space. All these actions can save energy and provide the opportunity to “tune” the illuminance levels in the space to bring it in-line with best practices.

I must measure illuminance in the space to determine if tuning is a possibility. If my light meter is inaccurate – I may recommend reducing the light output too much (and thereby decrease worker productivity and generate costly complaints for the owner) or I may miss an opportunity to reduce output and leave energy savings on the table.

How is Accuracy Measured?

My first step down the illuminance meter rabbit-hole was the Lighting Handbook. The Handbook provides a few relative clues for accurate illuminance measurement, but doesn’t talk about the practical aspects for meter accuracy. For that, we must refer to ISO/CIE 19476-2014, “Characterization of the Performance of Illuminance Meters and Luminance Meters”. This standard was widely adopted in 2014 by the American National Standard Institute (ANSI) and is the basis against which illuminance meters should be tested against. A similar document was published prior to 2014 (in 1986), which was the previous standard.

As I’ve mentioned in previous posts, light as human beings perceive it, consists of a spectrum of colors range from long wavelength reds to short wavelength violet. Experimental test data yielded a range of light spectra that humans perceive, which lighting scientists refer to a V(λ) and use in defining the lumen. Thus, all lighting measurements related to providing adequate lighting for human sight rely on this spectral response in their definition and all light meters must accurately mimic this response.

For many years, conventional light sources – fluorescent, metal halide, high pressure sodium, incandescent, and halogen incandescent – didn’t produce very much blue light. As such, light meters didn’t have to be terrible accurate with respect to the blue-light spectral response.

As we can see in these sets of spectra data, T8 lamps, T12 lamps, high pressure sodium, and metal halide lamps all have spectra that fall largely within the center of the luminosity function.

LED lighting is another story all together. Most commercial LED products use a blue-pump diode that produces a narrow band of blue light. Since most of us work outside of the K-mart blue light special aisle, we need a broader spectrum of light and LED manufacturers “dope” the diode or install a remote phosphor to absorb some of the blue light a re-emit that light in “warmer” spectra – green, yellow, orange, and red. Depending on the blend of phosphors and the how much phosphor is applied, the warmer spectra may more or less light when compared to the blue-light contribution. Thus, a light meter with a deficient blue light response can have significant error.

In the spectra above, we can see the range of all the different LED chips included in TM-30’s workbook. The spectra of various commercially visible chips could fall anywhere inside the shaded region, depending on the pump and the phosphor. Gone are the days where blue light did not make up a significant portion of the spectral content of used in electric lighting design. A light meter that over or under reports spectral content on edges of the luminosity function won’t accurately measure LED lighting.

When we measure light in the space, we must consider where the light is coming from. In a two-by-four troffer office – we have little to worry about. In a private office office with indirect lighting and bright walls, cosine correction becomes even more important. Cosine correction is particularly important when measuring vertical illuminance in a wall washing or wall grazing application and when measuring horizontal illuminance in a daylit space with significant side lighting (i.e. lighting that comes from windows instead of skylights).

Now that we know what we’re working with, we can start looking at actual meter specifications.

Most meters will have a single cut sheet and they’ll report illuminance accuracy as follows:

This is a good first pass test.

The range/full scale accuracy phrases the accuracy as a percent of the maximum value your light meter can read. Thus, if a light meter can read up to 2,000 lux, you’d multiply the specified accuracy by 2,000 to determine the accuracy. If it the accuracy was 5% of range, the meter would read ± 100 lux or ±10 fc. If your meter supports multiple ranges (e.g 200 lux; 2,000 lux; and 20,000 lux), the margin of error would apply to the whichever range was currently active. Thus, at 5% of range for 200 lux would be 10 lux and for 20,000 lux it would be 1,000 lux. Where meters report accuracy in terms of the reading, multiply the listed error against whatever your meter currently reads.

The digits signifier considers at the smallest digit reported and multiplies it by the listed value. Thus, if a light meter could measure down to the 0.1 lux, and the accuracy listed ±4D, your meter would have an additional potential error of ±0.4 lux or ±0.04 fc. The digits accuracy is only important if you’re doing exterior or egress illuminance meter readings, but probably won’t come into play for most projects.

Spectral accuracy is usually reported using a chart and isn’t reported numerically – because spectral accuracy can’t be boiled down to a singular number and be meaningful to everyone and every application. To compare light meters, you can attempt to look at the two charts, but I find it’s usually better to use a chart digitizer (like DigitizeIt) and throw it into Excel to get my data analysis on. I picked a few of our light meters from our office as well as others we’ve reviewed for clients in the past few years and we can all marvel at the range. 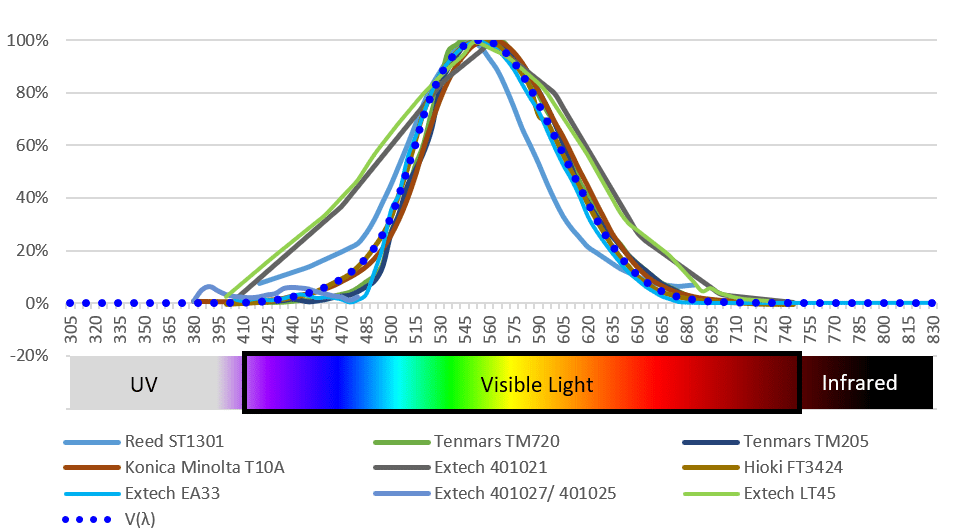 As we can see in the chart above, illuminance meters vary significantly. The dotted blue light is the luminosity function, V(λ), which defines a lumen. Some meters are too broadly sensitive to wavelengths that are less important to the luminosity function. Some meters are deficient in certain wavelengths. And yet others seem to be fairly accurate. Let’s untangle the data a little further. 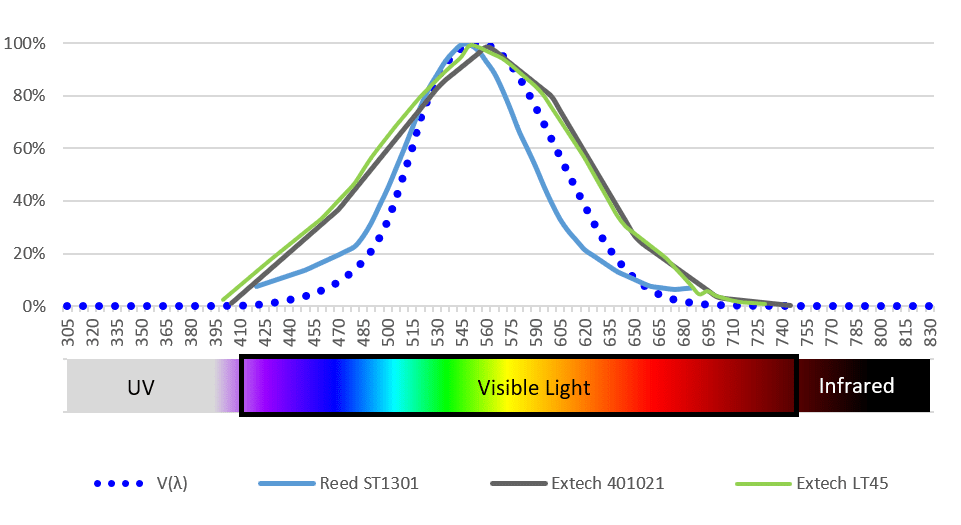 In this chart, we have two Extech meters and a Reed meter that measures too much light in the blue region of the spectrum. These light meters will generally report inaccurate illuminances for LED’s with blue pump chips. The Extech meters generally over report in the red-orange range of the spectrum, meaning they over estimate incandescent light, but not quite as much as they do with blue light. 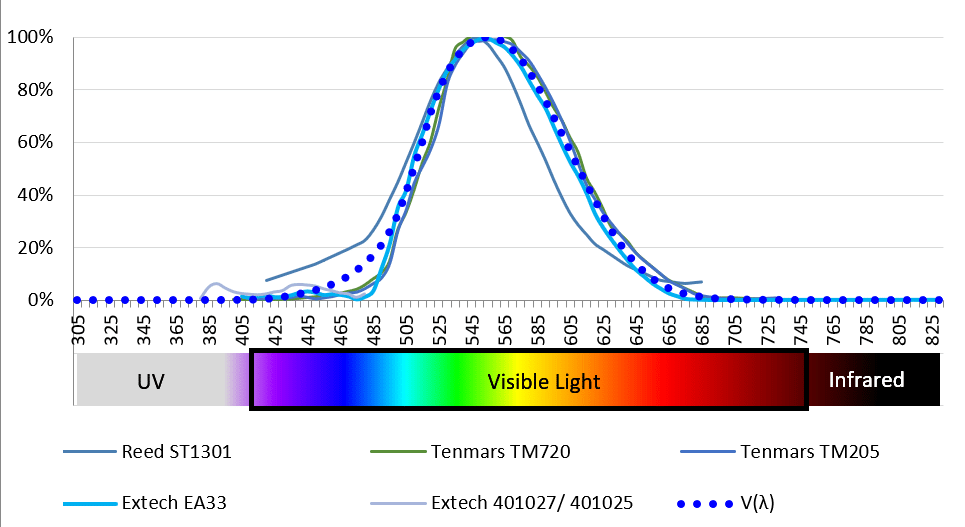 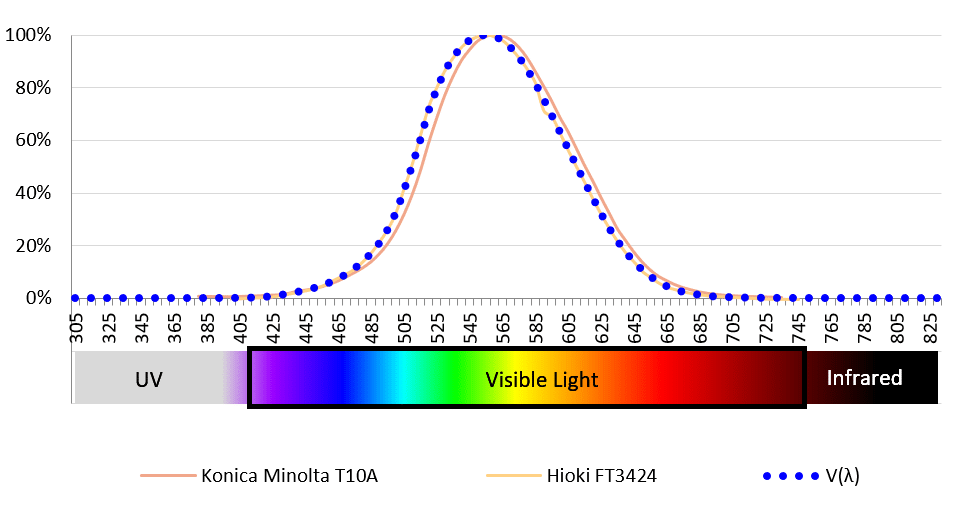 Manufacturers rarely publish the cosine accuracy for incremental angles. Instead, they list the accuracy for these angular ranges – at 30°, at 60°, and 80°. The measurement is quantified as the angular difference from normal (i.e. perpendicular with the surface). Directional accuracy reported in this manner is usually enough to evaluate whether a light meter can be used for low angle measurements. It’s quite common for light meters to have a 25% margin of error at 80°, however, more accuracy light meters for measuring low-angle light exist. The best I’ve seen, the Konica Minolta T-10A, has a maximum error of 3%.

Tips For Buying an Illuminance Meter

Light meters vary in price significantly. There are reasonably accurate light meters available in the $200-$300 range. Most light meters under $100 have flaws – including low cosine accuracy and poor spectral response.

If you’re considering an illuminance meter that does not include a spectral response curve or report cosine correction accuracy – request it.

3.    Get an Illuminance Meter with a Lens Cover (and Use It)

Good cosine correction doesn’t mean much when the lens is scratched up. Scratches cause the lens to refract light away from the sensor and could influence your readings.

The all-in-one light meter I carried for years turned out to have an accuracy of ±5% full scale + 4D, or ±10.04 fc. This makes evaluating hallway illuminance levels (10 fc average), egress illuminance levels (1 fc minimum), and task tuning opportunities borderline impossible. Combined with the failure to report the cosine correction and the spectral response – I decided to retire that light meter and purchase a more accurate meter for my tool kit.

Making Use of an Inaccurate Light Meter

Though as a lighting professional I had to retire my inaccurate light meter, you can still overcome their limitations with a little foresight and some benchmarking testing. Using a calibrated light meter, you can test your existing light meters under various light sources and develop a table of ratios by light source to scale your inaccurate light meter. It’ll be a little tricky with LEDs, which have spectral that vary significantly with color temperature, but it’ll get you closer to the real illuminance value. As you take readings, be mindful of your meter accuracy and avoid making recommendations when the change you seek to make puts you in the margin of error.

If you have any questions about using your existing light meter or purchasing a new one, feel free to contact us anytime.