Save the Cheese from LEDs! How LEDs can spoil your cheese and how to prevent it. 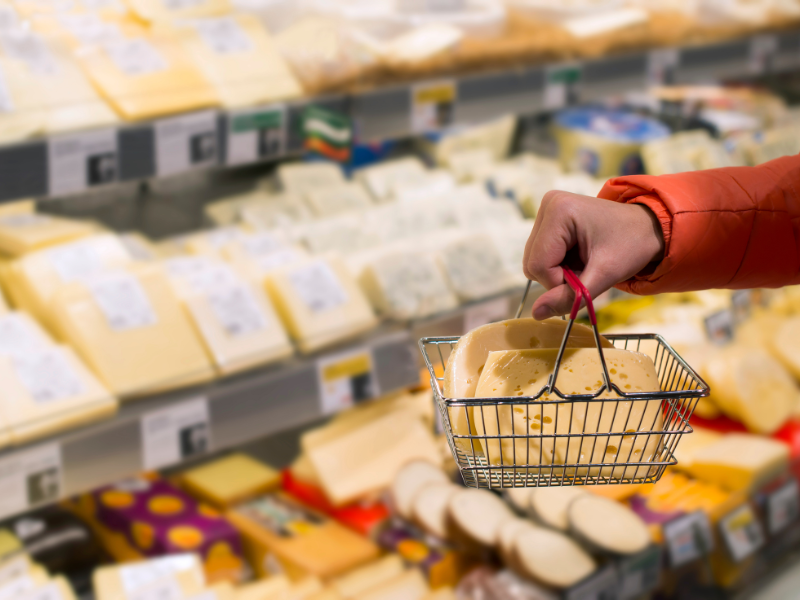 10 Jul Save the Cheese from LEDs! How LEDs can spoil your cheese and how to prevent it.

I recently held a session on Best Practices for Lighting Audits at PG&E’s Pacific Energy Center and someone asked me something which truly intrigued me about cheese (?!) and lighting. I love sharing my experiences in these classes and picking up tips and tricks from other folks fighting the same battles in their own line of work, and this class didn’t disappoint on the learning aspect. As our class was winding down for the day, one of the attendees asked if the new LED case lighting on their cheese merchandiser could explain why their cheese was spoiling more quickly than it had prior to the retrofit.

Yeah, that was a head scratcher for me, too. Strangely, light and cheese were not on the Lighting Certification exam. I’ve worked with a few customers who have LED merchandiser lighting, but this was a new one for me. On the BART train home I fired up my web browser and started researching.

I found an excellent doctoral thesis from far off Norway. Norwegians rank 13th globally for cheese consumption per capita at 19.5 kg per person per year according to the Canadian Dairy Information Center (France, for comparison, consumes the most at 26.8 kg per person per year). Thus this thesis, published by the Norwegian University of Life Sciences and authored by Natthorn Intawiwat, seemed like a worthwhile read through.

Getting Some Gouda Data – Why are LEDs Causing Early Cheese Spoilage?

The thesis provided some some sensitivity curves for the primary chemicals that break down and release oxygen, thereby shortening shelf life and generating off colors and flavors. These off flavors include ‘sun flavor’ (of milk left out in the sun), rancid (spoiled), and activated (likened to burnt hair or feathers). None of that sounds particularly appetizing, does it?

The chart below shows the spectral sensitivity of a two of these components, riboflavin (vitamin B12) and chlorophyll (left over in the milk of the ruminant animals). Below the curve is a ribbon indicating the relevant spectrum of light.

The Illuminating Engineering Society’s TM-30 publication has a wealth of pre-defined lamp spectral power distributions. I pulled out the spectral power distribution of a 4,100 kelvin T8 fluorescent lamp and compared it to a randomly selected 3,8000 kelvin, blue-pump LED. The composition of T8 lamps is largely the same throughout the industry, so I’m comfortable using this data for my analysis. LEDs, on the other hand, vary significant from manufacturer to manufacturer. Were I to provide real world recommendation, I’d try to get manufacturer LM-79 test data for the chips in the fixture to evaluate the specific response of real lamp per unit of light exposure.

Let’s take a look at the T8 lamp in the chart below.

T8 lamps rely on a ballast to excite mercury inside the lamp. The excited mercury releases ultraviolet light inside the lamp, where it is absorbed by a phosphor coating and released as visible light. We know this T8 lamp is roughly 80 CRI because it has three large peaks, one for each of the phosphors used in the coating (blue/purple, green/yellow, and orange/red). We can multiply values for the relative spectral power density by the relative spectral absorption curve and sum the results to come up with a unitless sensitivity product for the T8 lamp: 1.83 for riboflavin and 0.87 for chlorophyll.

Let’s look at our LED curve.

Here we see the typical spectral pattern of a blue-pump LED. Blue LEDs are the most efficient means of converting electricity to visible light (in terms of material cost and energy). Since most people don’t enjoy working under a cartoonishly blue light source, manufacturers ‘dope’ the LED with phosphors designed to absorb blue light and re-emit light in the green/yellow/orange/red frequencies to provide a better recreation of white light. The peak LED emission is right in the middle of the riboflavin sensitivity and the red light is substantially greater for the chlorophyll’s secondary sensitivity peak. If we follow the same process outlined above, we get a unitless riboflavin sensitivity of 4.54 and a chlorophyll sensitivity of 2.76.

If the light exposure quantity remains the same (e.g. the cheese was illuminated to 20 fc before and 20 fc after), we’d expect the LED light source to degrade riboflavin two-and-a-half times more and degrade the chlorophyll more than three times faster than the T8 source.

So these LEDs stink for lighting cheese, what the owner to fondue? There are a few solutions which may work.

Option 1: Reconfigure the cheese case to place the store-cut cheese further away from the light source. Luminous intensity drops off with the inverse square of the distance. Thus, if the cheese were originally 6 inches from the light source and it were moved 18 inches away, we’d expect the light intensity to drop about 90%. Good candidates for cheeses nearer a light source include those in opaque containers or wrapped in paper (which have low light transmittance).

Option 2: Wrap the cheese in paper then plastic. Plastic cling wraps commonly used at cheese counters transmits light readily. Switching to paper likely will cost more; however, depending on the volume of cheese sold and discarded, the prolonged shelf life should offset the cost.

Option 3: Install a filter on the LED strip. We could select a filter that selectively removes part of the light spectrum. A yellow-green filter (e.g. Roscolux’s #3304 filter) will absorb the blue and red frequencies that degrade riboflavin and chlorophyll.

As seen in the chart above, the filter limits blue and light transmission. When compared against the T8 light source we get the following sensitivity values in the table below. The riboflavin effect is lowered dramatically, but the chlorophyll impact is still high relative to the baseline. We could select a more dramatic filter (like #4430), but we risk potentially distorting the coloring of the packaging for only a minor improvement on the chlorophyll performance. I’d recommend using the subtler filter and then if that doesn’t resolve the issue trying the second filter. Another point of caution includes the reduction if transmitted light. Filters actively block light and thereby reduce the light on the merchandise which may negatively impact sales for other products in the merchandiser. 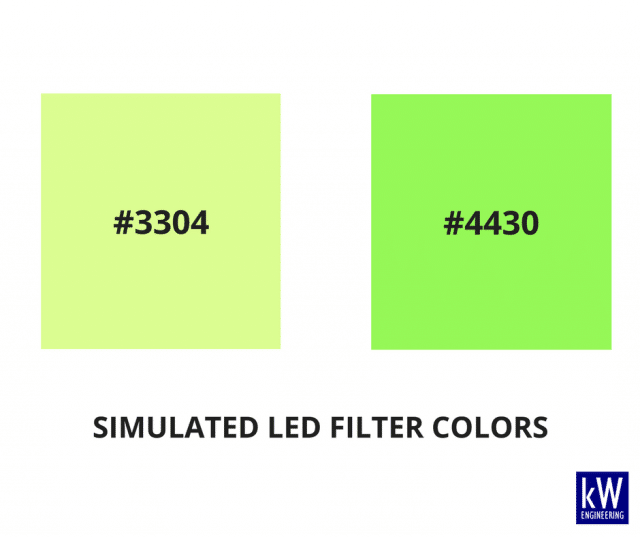 Option 4: Try a New Lamp/Light Source. If it comes to this point, I’d reach out to a manufacturer that specializes in dairy merchandiser lighting to select a replacement product and perform some cheese tasting after installing the mock-up. It may be that a little further investigation will yield the best results. Besides being more expensive, replacing the case lighting with something less rich in the blue and red spectra we stand to reduce the total color rendition of the cheese merchandiser and drift away from our ideal 4,000K target. Selecting a far cooler light source reduces the red content that impact chlorophylls, but generally increases the blue content. Selecting warmer color temperature generally increases red content and reduces blue content.

While I haven’t had the opportunity to visit this facility and review my findings with the attendee who brought it up, it possible to draw some general lessons before embarking on a change in lighting – whether in a retail merchandiser or in an office.

1. Assemble a team of experts: I had to do some digging to find out what this was all about. It involved gathering research that took time to absorb. It may be that a manufacturer in this industry or a lighting designer specializing in retail lighting may have picked this up instantly and solved the problem without any costly product loss.

2. Not every problem needs a hammer: A new lamp or luminaire is not necessarily the solution here. There are some relatively low-cost process modifications that could solve the error without a costly retrofit of the merchandiser lighting while maintaining the system efficiency.

3. Wavelength manipulation is tricky: There are only so many levers to pull to manipulate a lighting spectrum. To solve this problem with a new luminaire, I suspect we’ll have to make some lighting quality sacrifices to reduce product loss. The IES TM-30 tool was invaluable to making this clear.

Lastly, if you’re ever interested in making use of the fantastic facilities PG&E shares with the greater energy efficiency community which makes talking about lighting hands on and practical, check out their calendar for upcoming classes.

Effects of LED Storage on Soft Fruit or Vegetables

This is interesting and there may be other implications for large scale use of LED in large soft fruit and vegetable storage. Do you have or have you conducted any research into the effects of LED storage on soft fruit or vegetable storage? Fruit is sensitive to light and temperature and whilst everyone is rapidly moving to LED for their chill stores  – there might be some unforeseen implications.

Great point! All light (depending on wavelength) generally causes photo-degradation in one manner or another. Unfortunately, based on the cursory research I’ve done, it seems to be heavily dependent on the exact foodstuff as to whether certain wavelengths will negatively effect the ripening of food.
There are two key things to remember: 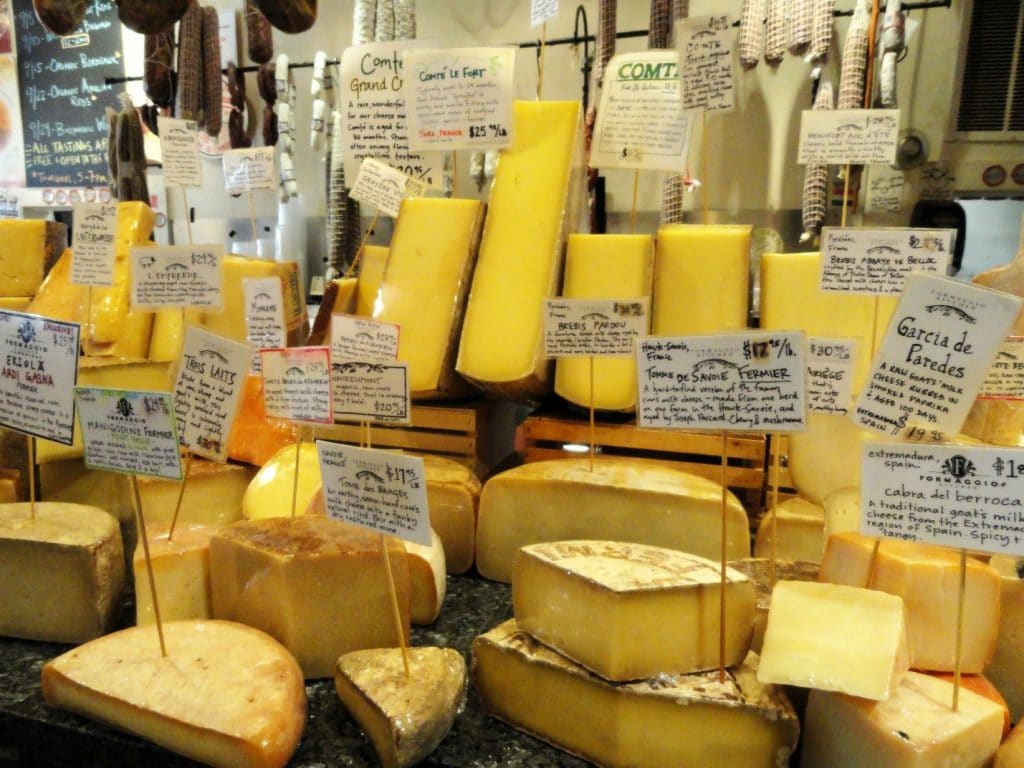 How can we help you save money and lower your carbon footprint?
CONTACT US
We use cookies to ensure that we give you the best experience on our website. If you continue to use this site we will assume that you are happy with it.Ok