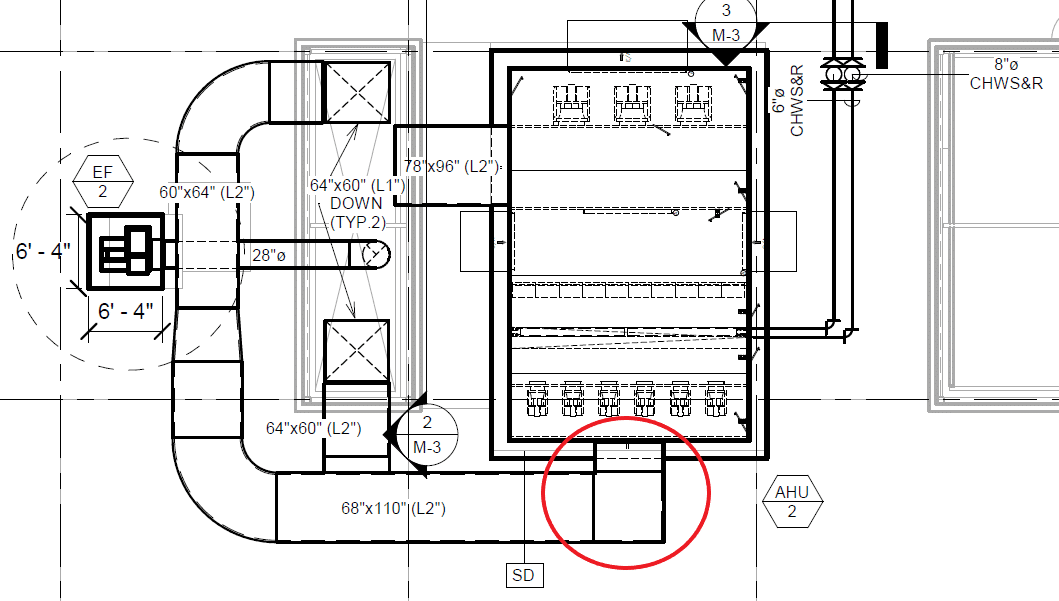 We often speak of new construction commissioning as a quality assurance process for new buildings, beginning from conception and design and continuing through construction and into initial occupancy. Some see it merely as a necessity for obtaining LEED points and complying with energy code. Others see it as an opportunity to construct a high performing building.

Like many things, the value of commissioning depends on who is doing it and who has hired the services for it. Here’s one example from a client project to help clarify why commissioning might matter to owners who care about operating costs, occupant comfort, and building value.

Earlier this year, while reviewing the proposed mechanical design of a planned four-story office building, I noticed that the building’s two rooftop air handlers both discharged supply air into sharp, 90-degree turns. Following the abrupt turn, the ductwork eased its way around the air handler and then plunged downward into the building, delivering supply air to each of the four floors.

Fortunately, a supervisor had trained me to identify such situations, as abrupt ductwork transitions lead to increased turbulence, forcing the supply fans to work harder to pressurize the building. The immediate 90-degree turns, though simple and functional, result in more fan energy use, vibration, and noise.

Below is a schematic of one of the air handlers, with the 90-degree turn circled in red. It follows a supply fan bank with 180 horsepower of motor capacity.

In our design review comments, we called out this issue to inform the design team and owner’s representative of the trade-off being made: a cheaper duct design at the expense of higher operating costs and mechanical noise.

Conditions at the inlet and outlet of ducted fans that result in increased friction and turbulence, such as abrupt changes of direction in ductwork, are known as system effect. The Air Movement and Control Association (AMCA) has researched this effect, beginning in the 1970s, with their results compiled in AMCA Publication 201-02, Fans and Systems.

For an example of system effect, see the velocity profile of the fan system below. (This is reproduced from page 37 of AMCA Publication 201-02.) Note how (1) the duct is larger than the fan outlet, leading swirl and negative air velocity at the lower lip of the fan outlet; and (2) the abrupt 90-degree turn causes swirl at the near edge of the upward branch. These pockets of non-uniform flow represent wasted fan power. 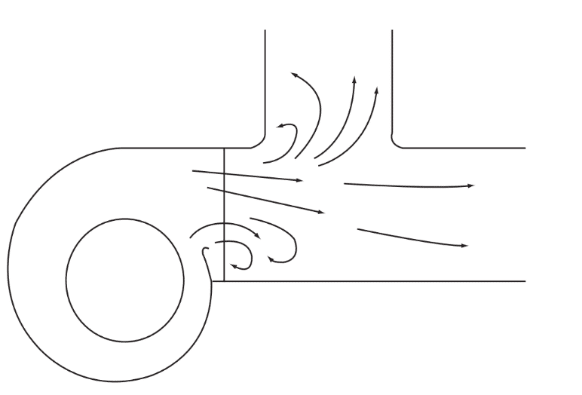 For air velocities of 2,500 fpm or less, AMCA recommends allowing a run of straight duct at least 2½ times the diameter of the duct at the outlet of a fan before a free discharge or elbow. For each additional 1,000 fpm of air velocity, they recommend adding one duct diameter of length. In tight spaces, such as small mechanical rooms where longer runs of duct are not possible, they recommend installing turning vanes at the duct elbows to achieve more uniform airflow and reduce pressure drop.

Quantifying the Energy and Financial Impact

Without running experiments, it is challenging to estimate exactly how much additional fan energy will be required to overcome the 90-degree turns that I flagged in the design review of this project. For rough estimates, though, the fan manufacturer Greenheck provides a system effect simulator. For a vane axial fan with a smooth inlet run of duct and a 90-degree elbow at the outlet—which is similar to the rooftop air handlers I reviewed—the simulator estimates a 27% increase in fan energy.

If we were to invest in extra duct to allow for fully developed flow before the 90-degree turn, what would be the benefit from eliminating the excess fan energy? We can perform a back-of-the envelope calculation to get a ballpark idea of the cost savings.

Let’s assume a conservative 10% increase in fan system efficiency. We can then estimate the fan savings as

where Flow and Pressure are based on the design conditions for air handlers, taken from the mechanical design plans, EFF1 is the current system efficiency, EFF2 is the proposed system efficiency, and C is a constant for converting cfm of flow and inches of water column of pressure into horsepower.

Using the system parameters for the four-story office building, and assuming an efficiency increase for a typical fan system from 65% to 75%, the horsepower savings then become

which means that 12.4 horsepower would be dissipated as friction and noise. (For simplicity, and to roughly account for part-load conditions, I have assumed the flow and pressure design conditions for only one of the two air handlers.)

By converting to kilowatt-hours, and assuming an average fan motor efficiency of 90%, 2,600 annual operating hours, and a blended electricity cost of $0.15 per kWh, the annual cost savings are then

Pennies in the bucket, some may say. Why put forth the effort to run a few more feet of duct?

For a four-story office building, this is not an astronomical amount of added value, but it is likely much greater than the cost of designing a more gradual transition in the ductwork.

Second, what about the executives whose offices are on the fourth floor? To what extent would prospective tenants value a quieter place to work, with less hum of mechanical equipment above them? This benefit is challenging to quantify. Some building owners may accept the risk of slightly more noise and vibration. Others may find great value in investing in acoustic comfort.

Third, energy conservation is a pragmatic and ethical choice. The benefits of cutting down on energy waste extend to regional air quality, public health, and national energy security. Why consume additional electric power to simply dissipate it as friction and noise on your roof? We need better quality buildings in the 21st century.

As engineers, many of us enjoy working on new construction projects because we can identify and solve problems before they become baked into the design and bolted into the building. Once the systems are built, it can be cost prohibitive to correct issues like fan system effect.

For more examples of how commissioning can improve your building’s bottom line, see here what my colleague David Gilliland has written about the issues he has identified in his commissioning projects.

If you’re interested in discussing the potential value of commissioning for your building, new construction or existing, please get in touch.