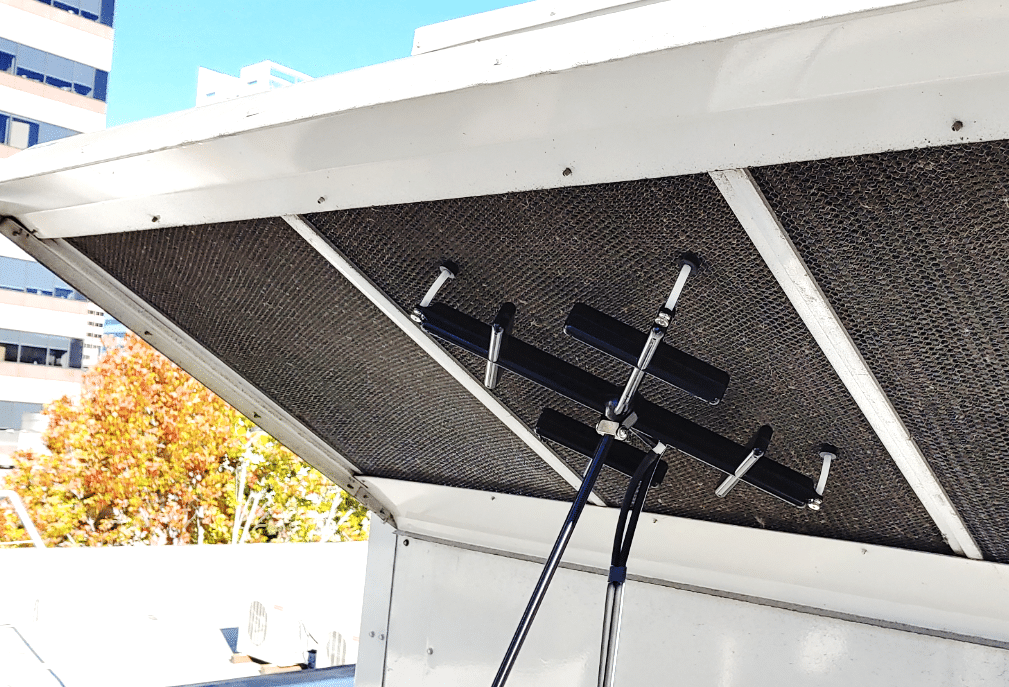 Monitoring and maintaining building ventilation rates are now more relevant than ever for occupant health and safety. In this article, I share how our team diagnosed an underperforming supply fan and underscore the importance of routine fan system maintenance.

At this site, we had a test and balance (TAB) report from when the building was constructed, so we knew the fan speed that corresponded with system operating at near design flow. We measured the fan’s speed to be about 74% of what it was at the building’s inception.

Because of the ductwork configuration and difficult under-roof access, we could not conduct a pitot traverse measurement, which is the most accurate method of HVAC airflow measurement. Instead, we used a velocity grid, shown below, to measure airspeed at the inlet of the unit.

By multiplying the airspeed at the supply air intake by the cross-sectional area, we calculated the volumetric flowrate in cubic feet per minute (cfm). Our flow measurement was 69% of the design flow, as shown in the chart below.

Causes of Reduced Flow in Your Building Ventilation System

We didn’t see anything choking airflow, but the dramatic drop in fan speed from the design speed was a clue. We didn’t have time to look at the fan’s belt drive, but we asked the building engineer about the reduction in flow before we left.

He said there were no changes to the ductwork, but he would inspect the belt drive. A week later he called and told me that the belt was beginning to bottom out in the motor pulley, such as shown in the image below. (Note that in belt drives, pulleys are also sometimes called sheaves (pronounced shiv).) We both agreed that something was likely wrong with the belt, and it should be replaced. 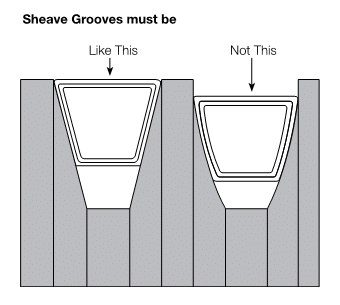 When a belt drops into a pulley groove, as shown above, the pulley’s effective diameter is reduced, which reduces belt speed. This results in a reduction in fan shaft speed and airflow. There are several explanations for why this occurs.

First, if the pulley walls are worn, the belt will bottom out more easily, and the pulley should be replaced.

Second, if the belt is worn, it will drop deeper into the groove and it should be replaced.

Third, if the belt has the wrong dimensions required by the pulley, it will not fit properly and should be replaced with the correct belt size.

Any of these situations can lead to belt slip, which wastes the belt’s energy and creates heat that can quickly degrade the belt’s structural integrity. Typically, the first sign of belt slip is a screeching sound when the motor starts or stops, or if it’s really worn, it may whine continuously. This is why I recommend using all of your senses in an energy audit. What you hear can be as important as what you see. Any time you hear equipment running, it points to waste. If the equipment were efficient, it would be quiet, by definition. Noise represents energy leaking out of a system in a way you don’t want, generally through a friction-prone weak spot like a sheave, belt, or bearing.

Another issue affecting power transmission in belt drives is alignment. Poor alignment results in increased friction on the belt and additional stress on the drivetrain, which accelerates wear and can reduce airflow. The diagram below shows common alignment issues with belt drives. 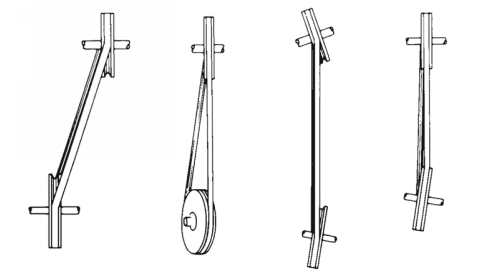 Of course, perfect alignment is not always possible. Therefore, many fan manufacturers provide tolerances for deviations from perfect alignment, such as the maximum allowable gaps shown in the image below.

The building engineer reported to us that he carefully inspects for belt drive alignment, so fortunately this was not an issue at his building.

Pulley alignment, belt sizing for the pulley grooves, and belt tension are common causes of underperformance for fan systems. These issues cause more mechanical energy to be dissipated through friction and less energy to be converted into airflow. The motor still consumes relatively high amounts of power, but the fan receives less of that power.

Belts are the most maintenance intensive aspect of a fan assembly. If the belts are too loose or of the incorrect dimensions, the transmission efficiency of mechanical power is reduced. If the belts are too tight, wear and tear of the system’s belts and bearings will accelerate. Finding the correct belt size and the sweet spot of belt tension will keep your system at optimal performance.

A couple months after my initial measurements, the building engineer called and told me that he had replaced the belt with a new one that was correctly sized and flush with the pulley. Unfortunately, I was not able to re-evaluate the supply airflow to quantify the difference in ventilation, but we both felt more peace of mind knowing that the belt drive on that ventilation unit was restored to good condition.

If you have questions about building ventilation systems or your building’s energy use, contact us at any time.