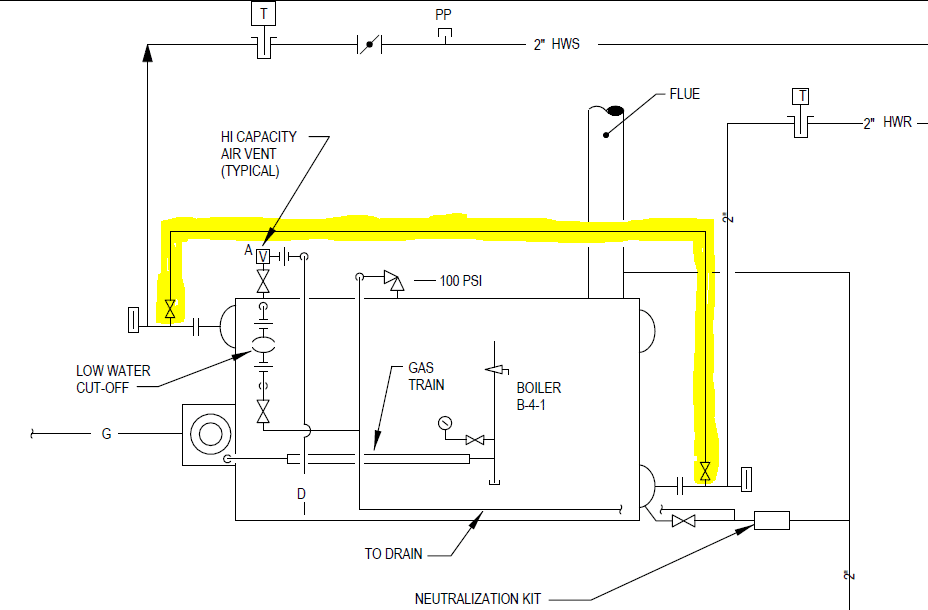 I first encountered condensing boiler woes when conducting an energy audit for a winery which had retrofitted its conventional boilers to condensing boilers. Operating with a supply water temperature of 180°F and a return water temperature of 140°F, the boilers never operated in condensing mode and the actual boiler efficiency was around 85%, far from the 98% efficiency advertised by the vendor. Having paid a premium for the new boilers, the maintenance manager was not happy.

Condensing boiler systems need the return water temperature around 80°F or lower to achieve peak efficiencies. Elevation, fuel type, and water temperature rise also affect the boiler’s ability to capture latent heat from its flue gases and reach optimal operation. Whether you are designing a new construction project or retrofitting an existing system, it pays to do your homework and understand the key variables. 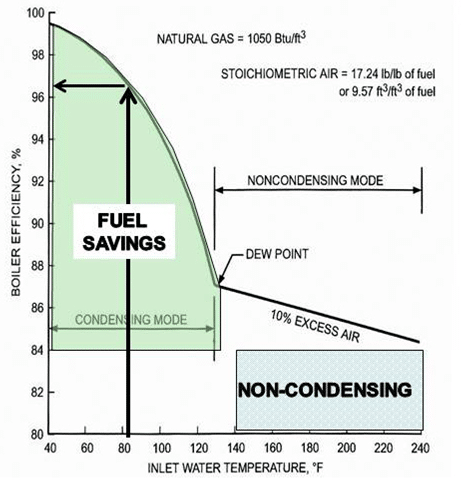 Note that the 135°F (condensing) temperature is a function of the fuel. The chart is for natural gas.

During design review for a client, we found the mechanical schedules showing 96% condensing boiler efficiency in a system with a design an entering water temperature (EWT) of 110°F and a 30°F rise. See the hot water boiler schedule below.

Given that condensing boiler efficiency is a function of EWT, we checked manufacturer efficiency curves. For this particular model, Lochinvar had efficiency curves based on only a 20°F rise, shown below. At full load, the boiler has an efficiency slightly under 92%. That is good, but it is not 96%. 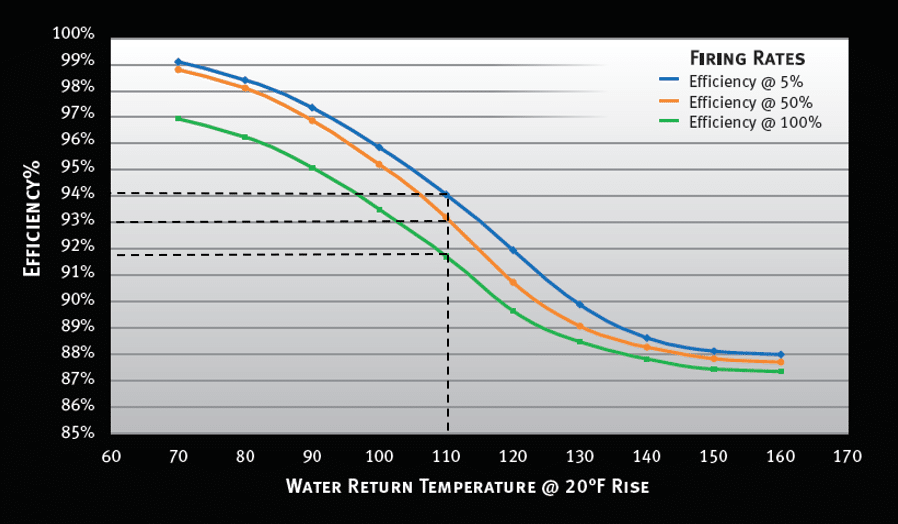 We checked other condensing boiler models sold by Lochinvar, which did have efficiency curves for a 30°F rise, and they showed boiler efficiency to be approximately 93% at an EWT of 110°F. Therefore, we recommended that the design team either revise the boiler efficiency to 93% or adjusting the system to return a lower EWT.

Another point of consideration is Annual fuel utilization efficiency (AFUE), the efficiency metric used in the hot water boiler schedule. AFUE is annual heat output divided by annual energy consumed by the boiler. This metric results from a laboratory test that considers the seasonal variations of part-load operation, on/off cycling, and stand-by losses. The full methodology for estimating AFUE for boilers and furnaces is outlined in ASHRAE Standard 103, which applies only to residential and light commercial boilers with inputs under 300,000 Btu/h. The boilers listed in the mechanical schedule are rated at an input of 2,000,000 Btu/h, and in accordance with AHRI Standard 1500, their specifications refer to thermal efficiency or combustion efficiency, not AFUE. The mechanical schedule was perhaps copied from another project with smaller boilers that did have AFUE.

In the design review of another project, we identified a warm-up loop around each condensing boiler. In non-condensing boiler systems, these warm-up loops mix supply and return water in order to maintain at least 140°F feedwater into the boiler. For non-condensing (i.e., standard (85%) efficiency) boilers, this serves to avoid condensation and fouling of the heat exchanger. (Acidic condensate present during short cycling or warmup, without a runaround loop, will corrode the heat exchanger and result in premature failure.)

In a condensing boiler system, however, the return water temperature should be kept low in order to condense the water vapor and capture the latent heat from the boiler exhaust. The heat exchangers of condensing boilers are designed and manufactured for this. Mixing of the supply and return streams should be avoided, unless it is to maintain a minimum flow rate through the boilers at low loads. Therefore, in condensing boiler systems, warm-up loops are often discarded in favor a minimum-flow bypass line located after the distribution pumps.

In addition, primary-only variable flow pumping should be used. In primary-secondary pumping systems, with variable flow secondary pumps, the constant-speed primary pumps can lead to unintended mixing between the primary and secondary loops at lower loads, which raises the return water temperature and lowers condensing boiler efficiency.

How to optimize your system

In summary, for optimal operation, condensing boiler systems need the return water temperatures well below the dew point of the boiler exhaust (for natural gas, this is around 140°F in the Bay Area and 125°F in Denver), ideally around 80°F or lower. Non-condensing boiler systems require the return water temperatures to be above the dew point of the boiler exhaust (hence the warm-up loops).

For other design considerations, such as system delta-T and sizing of terminal units, see “Best Practices for Condensing Boilers” (2018 ASHRAE Journal) and “Principles of Condensing Boiler System Design” (white paper by Group 14 Engineering). If you have questions about optimizing your boiler system, contact us anytime.

Acknowledgements: I would like to thank Jim Kelsey and Lyn Gomes for their technical edits and additional material for this article.