15 Mar What Will Happen to HVAC Refrigerants with the HFC Phase Out?

I think that the energy efficiency industry needs a big wake-up call around changes that are coming to the world of refrigerants. In last week’s post, I discussed how these changes are going to hit the commercial refrigeration market. But the coming changes to HVAC will be just as seismic and I’ve seen little recognition yet in the world of energy efficiency.

There are two big policy pushes that are bringing the phase out of HFC’s and both are based on the simple fact that most of the refrigerants that we’ve used for the last 90 years either deplete the stratospheric ozone layer, or a powerful global warming gases (or both!). We first phased out the ozone depleting gases via the Montreal Protocol (the most successful environmental regulation you’ve never heard of) which went into effect in 1989 but really impacted the market for HVAC in the ‘90s.

That fixed one problem, but didn’t address the fact that most refrigerants, when they eventually leak into the atmosphere, are thousands of times more powerful than CO2 when it comes to their impact on climate change. According to CARB, just two tanks of R-22 do just as much damage to the environment as the annual fuel impact of 14 cars. R-22 is one of the most commonly used refrigerants in the world and virgin refrigerant is completely phased out in the US starting in 2020. The measure used to describe these impacts is Global Warming Potential, or GWP, and the bottom line is that when we switch away from ozone depleting gases, we switch over to refrigerants with GWP’s from 2000 to 10,000 times worse than CO2.

In response to this, there are two types of regulations that are driving the market away from these high-GWP refrigerants:

What this means for the HVAC world is that, beginning in 2023 we’re going to see big changes in the new air conditioning systems that we install in the state. In that year CA will ban (according to proposed regs) new air conditioners with a GWP higher than 750. The following year 2024, those bans will extend to the chiller market too. 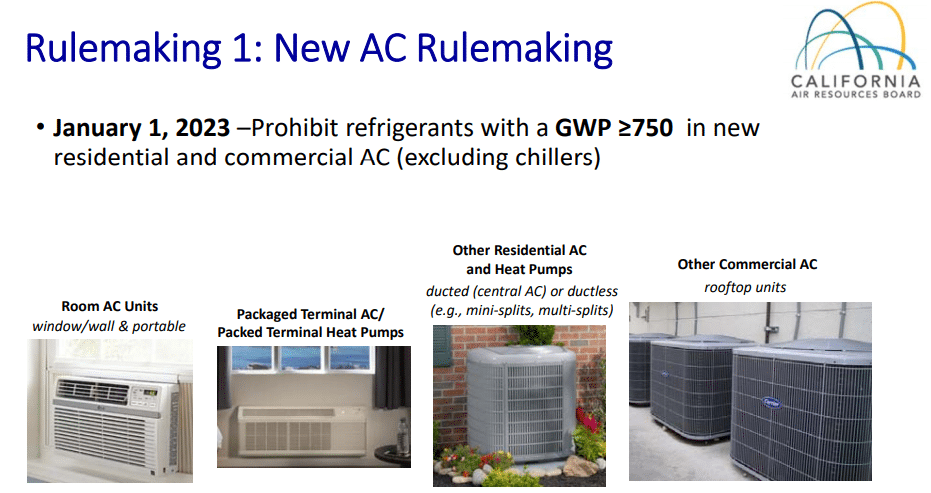 I don’t use the term “seismic” loosely here – these regulations are going to have a huge impact on the HVAC market because there just aren’t many refrigerants with GWP < 750. In fact, that will narrow the field down to:

Each of these options has it’s pros and cons (which is why we picked the CFC’s and the HFCs in the first place):

CO2 works well at low temperatures but has poor energy efficiency compared to the other options. Also it has very high operating pressures that require systems to be constructed using higher pressure rated materials and installation practices, at higher cost.

Ammonia has been used as a refrigerant ever since refrigeration was invented, and it’s a very energy efficient refrigerant, but it is caustic and has a nasty trait of turning into acid when it comes into contact with moisture. Also, it is mildly flammable (listed as ASHRAE A2L). However, we’ve used it in industrial refrigeration for over 100 years because, just like fire, the hazards are known and well understood. And your nose is a very sensitive ammonia detector – most people can smell ammonia in concentrations far weaker than are dangerous. But you probably don’t want it in your through-the-wall heat pump at your hotel.

Hydrocarbons like propane also make very energy efficient refrigerants and have been widely adopted in Europe and the US. You probably wouldn’t have guessed that target already has self-contained refrigerated cases in over 1000 stores. Current regulations in the US, however, limit the size of these systems to very low charges – only 150 grams per system. Propane is obviously flammable (listed as ASHRAE A3 – highly flammable) but personally I think that people are way more afraid of using propane as a refrigerant than they are about driving around with a 5-gallon tank of it in the back of their car.

That leaves us with R-466a, the new kid on the block from Honeywell. R-466a barely gets under the GWP<750 mark, coming it at 733, by blending R410a, R32 and R125 with CF3I – a fire suppressant. This has earned the refrigerant an A1 safety classification (not flammable, not toxic) but I think we’re putting off the inevitable if you go this route. I think that it’s likely CARB will eventually ban this option too because it’s still a much more aggressive greenhouse gas than the other options.

Also, with R-466; 1) it won’t be cheap and 2) you still have the potential for nasty byproducts in the case that it’s in a fire. Ask a fireman which fire he wants to put out; the well known and understood propane fire, or the one that turns into hydrofluoric acid?

So, there are options on the horizon, but not a lot of them. We’re starting to see some CO2 heat pumps, and heat pump water heaters, and I’ve even seen one German chiller that uses water as a refrigerant. These kind of seismic shifts often offer opportunities for energy efficiency, so we need to be plugged in so that we can steer our clients in the right direction – not just one that’s going to save them money today, and cost them later.