California utilities are now allowed to define the new rate periods for on-peak thanks to a recent CPUC ruling. For many, the CPUC’s actions have been distant. However, this ruling has the potential to impact your bottom line. But have hope – you can mitigate effects through (properly commissioned) lighting controls.

With the new rate periods impacting solar value and electricity costs, it’s important to take action. On-peak rates are no longer mid-day, but start at 4 or 5 pm and run until 9 or 10 pm, depending on the utility. SDG&E and PG&E have their rate cases underway. SCE isn’t far behind. 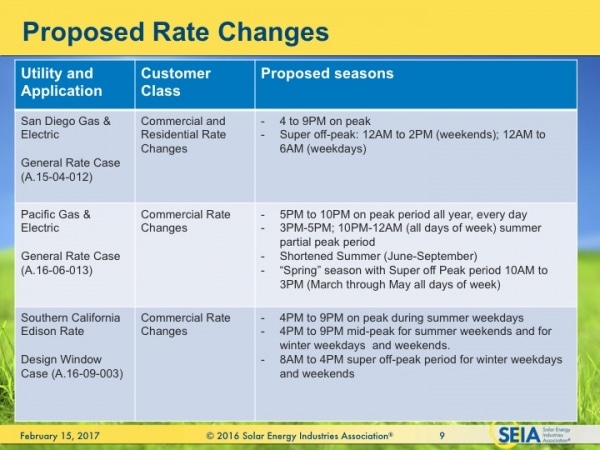 Remember the duck curve? Well, this has everything to do with the impact on how “on-peak” is defined and the associated rise in rates. Massive utility investments in solar PV have depressed the mid-day peak, the back of the duck. Now the 5-10 pm period, neck of the curve, will be defined as peak because it has the steepest ramp and is the most difficult to bring on power plants. With base load from nuclear going bye-bye (San Onofre now with Diablo following soon) this ramp becomes even more significant.

Right now, you might be saying, “How am I going to shed load at 5pm? My HVAC is already ramping down!?” How about exterior lighting?

Code minimum calls for an astronomic timeclock or a photocell. Smart engineers will combine both to reap the benefits of the extra light on a sunny evening while still maintaining safety.

Don’t be afraid to take it one step further by including motion-sensing controls, even when it is not required by code. The savings are magnified when the sensor is built-in to the fixture. When combined with good circuiting,  will shut off lights when not needed. This results in a 39% savings when base and proposed are both LEDs, as calculated from this 2012 CLTC/UCSF study. Motion controlled lighting (CLTC UC Davis study) also has an added benefit in focusing security’s attention where and when it’s needed.

What about dimming? Dimming can help, but may present a safety hazard if dimmed too much, either through poor sensor calibration or failure in commissioning. Daylight-adaptive control (through closed loop photocells) has had some study, there’s not enough to make a business case for the added control capabilities based on correspondence with one lighting control manufacturer.

And as we’ve seen on many, many projects, your lighting controls won’t save energy unless they are a part of the commissioning process. Why did I emphasize process? Because, functional testing can’t fix bad design! Thus, the emphasis on the initial tasks like OPR, BOD, drawings, and, of course, their review by a commissioning professional is critical to realizing lower energy use!

Think hydro could make a difference? Not if droughts restrict releases from reservoirs, especially in the November daylight savings time when reservoirs are at their lowest and the sun sets at 5 pm!

Big changes are coming that impact your bottom line. Don’t hide your head in the sand! Prevent, don’t pray!! Duck that drama!