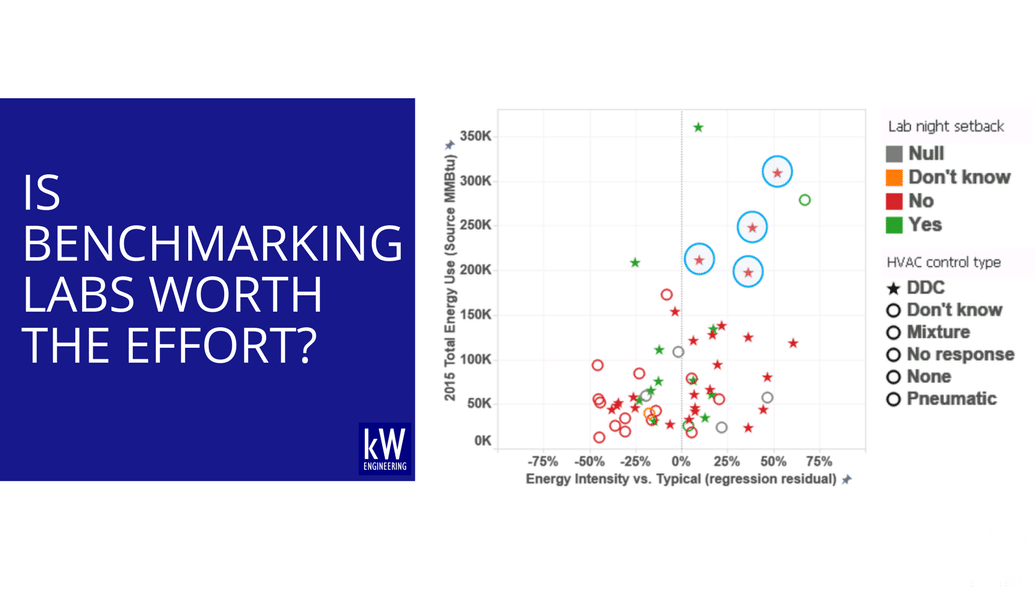 10 Nov Is Benchmarking Labs Worth the Effort?

Energy benchmarking is often the first step in a new energy efficiency program or sustainable design project. Benchmarking helps us to prioritize and focus attention; it also provides useful metrics for target-setting or gauging progress.

Lab buildings need benchmarking more than most. At first glance, the high energy intensities of labs make them appear wasteful relative to other building types. Lab energy intensities are highly variable between buildings, but – crucially – so are the research activities the buildings must support. And without any scoring system like ENERGY STAR to help us distinguish the truly inefficient labs from those with particularly intensive requirements, there’s little to quickly guide us towards the buildings in real need of attention. Despite their outsize contribution to the energy consumption of many campuses, labs are often granted a “free pass” for energy use because they are perceived as challenging, complex, unassailable targets for efficiency initiatives.

Arguably, the most useful role of benchmarking is as a catalyst for conversation on the drivers behind the energy consumption of our own buildings. In this use case, the precision of the energy comparison itself is of limited importance – a saving grace when data quality problems and other uncertainties affect even the benchmarking datasets with the most dedicated contributors. For lab facilities, with their diverse and complex functional requirements, the conversational catalyst function is particularly helpful: understanding the true functional needs of a lab facility is often half the battle in the pursuit of efficiency gains. But could benchmarking do more for labs than just start discussions? The Boston Green Ribbon Commission lab benchmarking study tells us that it could.

The study was commissioned by the Higher Education Working Group of the Boston Green Ribbon Commission (GRC), was managed by the Harvard University Office for Sustainability, and was conducted by kW Engineering. Reports from the first two years of analysis are available online. A third year of data collection is currently underway.

We sought to provide meaningful context for the energy use of academic lab buildings in the Boston area, and to use the data to explore the potential for an equitable ranking system for lab building energy usage. Seven academic institutions from the Boston area contributed energy, facility, and operational data for a total of 121 lab buildings. Because all 121 buildings experienced the same glorious Boston weather, and because the data collection process was uniform and carefully managed, the GRC sample benefits from significantly reduced data scatter than any other known sample of lab buildings. It is therefore the ideal test bed for statistical analyses. 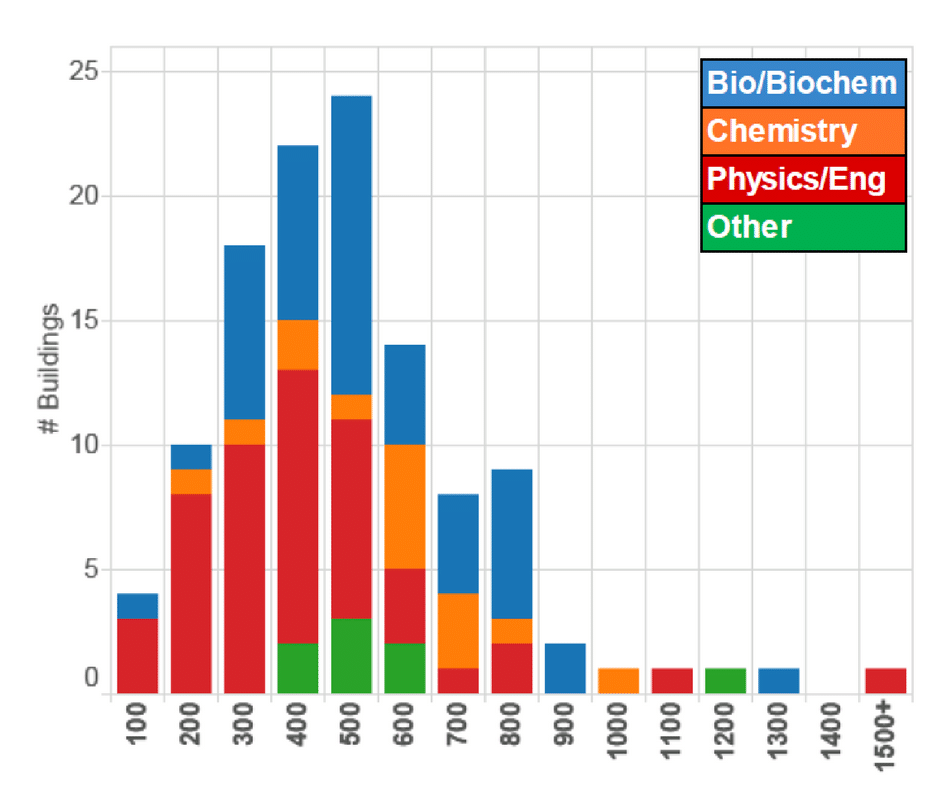 By dividing the Boston dataset based on broadly defined functional requirements, then constructing and testing a draft energy ranking system for many of the buildings in the sample, we showed that it is indeed feasible to identify lab buildings on the high- and low-efficiency ends of the spectrum using a simple scoring system.

The study used a regression method similar to that used by the EPA’s ENERGY STAR program. The building sample was segmented, and multi-linear regression methods were used to identify building traits that correlate significantly with energy use intensity. The most significant traits were lab type (biology, chemistry) and fractional lab area of the buildings. We then developed a regression model of the “typical” energy intensity for given building traits, and ranked each building based on the difference between its actual and “typical” energy intensity values. Encouragingly, the GRC regressions are as strong as those used by ENERGY STAR for other building types. Using the GRC models we can now – with industry-standard certainty – identify high- and low-performing lab buildings among peers, and flag buildings that merit increased attention. Development of the model is ongoing.

As a high-level exercise to direct attention and stimulate investigations, energy benchmarking is a valuable, economical, accessible, and quickly employed tool.

As a high-level exercise to direct attention and stimulate investigations, energy benchmarking is a valuable, economical, accessible, and quickly employed tool. While informative, however, benchmarking on energy usage alone says little to nothing about the technical feasibility or cost of potential efficiency projects, and may not provide precise estimates of savings potential.

Looking beyond pure energy benchmarking, the GRC dataset also contains some specific actionable insights at the system level. The figure below illustrates an example of candidate selection for a specific energy efficiency measure. The circled points are buildings with all four of the following features: high overall energy consumption, high energy intensity relative to their peers, modern DDC control systems, and no reported night airflow setback in lab spaces. While full risk assessments and engineering analyses are still needed, the identified buildings are excellent candidates for high-ROI implementation of lab night airflow setback controls. 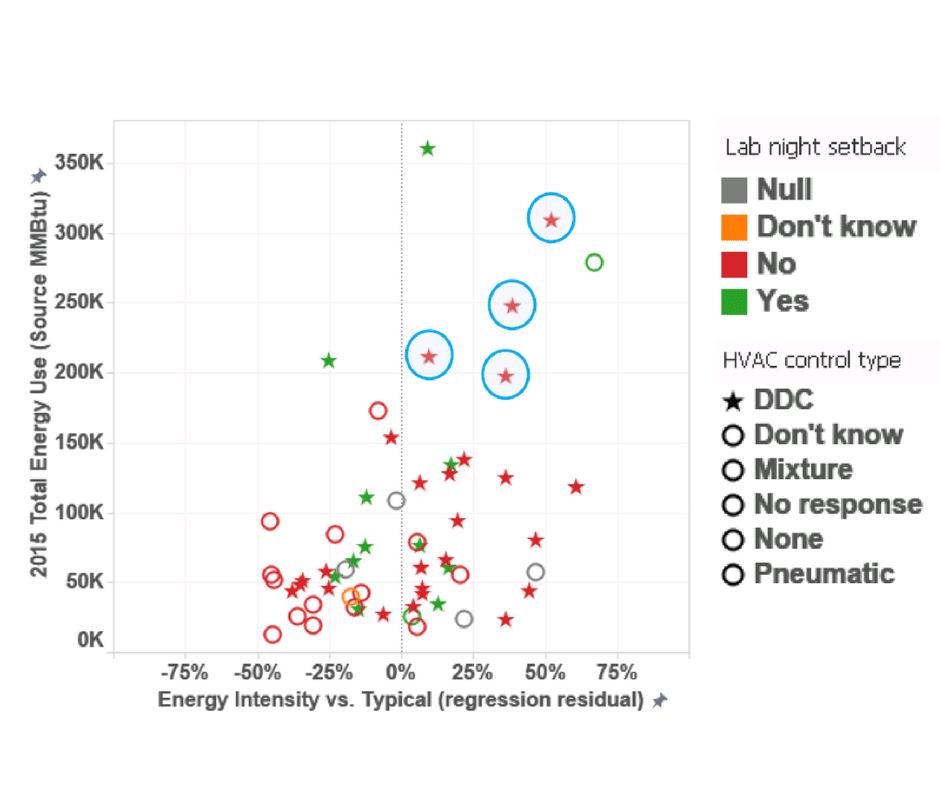 The operational data collected in the GRC study also enables benchmarking of policies and practices across buildings and institutions. This allows owners to learn whether their facilities are ahead of the curve in considering new operational policies or are merely catching up with industry standard practice. By demonstrating that a particular policy or measure has been implemented at many other sites, this type of comparison can also lend weight to the argument that a proposed efficiency project warrants real consideration.

A full lab efficiency roadmap should include audits, risk assessments, and engineering work in addition to benchmarking, but the GRC study demonstrates that lab benchmarking is a valuable navigational tool.